Sam Reynolds and Matt Macduff are back in South Africa at the Garden Route Trail Park in Knysna filming for Pure Darkness 3. This time they have gone bigger and better with some of the raddest dirt jumps knows to man. While we wait in anticipation for the final edit to be released, we caught up with the riders to get their take on the project, 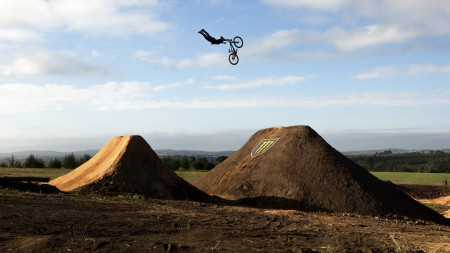 So what’s it like to be back at your “second home” at the Garden Route Trail Park in Knysna?
Sam: Yeah, you called it a home, it has been our home for the last 5 weeks, digging the shit out of stuff and we’ll be upset to be leaving. We’re having an awesome time.
Matt: It feels incredible, being here is awesome

What made you decide to come back out to South Africa to film for Pure Darkness 3?
Sam: We really realised the potential of the Garden Route Trail Park, we just knew that it was the coolest place and no-one else was going to let us build the biggest jumps and let us do exactly what we want. So it’s the perfect place for Pure Darkness 3.
Matt: We had such a good time last time with really good vibes. 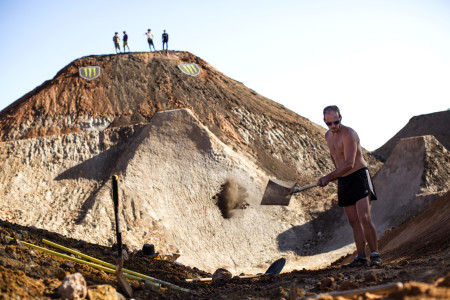 Why the Garden Route Trail Park?
Sam: Not only does Rob (Trail Park owner) love our ideas, he pushes our ideas.
Matt: Because Rob is the gnarliest guy on planet earth. Also, the dirt out here is incredible.

What’s it like working with their team and the locals?
Matt: It’s pretty good and it’s always nice to have the extra help. Some of them didn’t really know what was going on at first but I got this notebook out and drew some pictures. A picture says a thousand works so everyone got on the same page 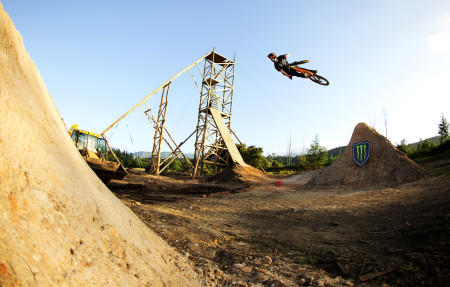 A lot more work has gone into this build for Pure Darkness 3. What was the vision and how do you think you’ve done?
Sam: Well we wont know until the video comes out I guess but I’m confident it’s going to be the best, most exciting Pure Darkness yet. And actually, a progressive project for the whole of Action Sports, not just Mountain Biking. I think this is setting a standard of how cool events and shootings can be.
Matt: It’s cool out there man, that course looks incredible.

Explain what you want Pure Darkness 3 to represent and what you expect from the final outcome?
Sam: I want it to show that you don’t need to be on the world tour circuit to be doing the coolest stuff because actually I think this is much cooler than that and more true to what Mountain Biking is. Like when you’re a kid, you go and build jumps and you try them, you crash and just you just have a good time. We want to show everyone that you can have a good time, you don’t have to training and stuff, Mountain Biking is the most fun thing and I want other sports to think that Mountain Biking is really cool as well. It’s always been in the shadow of Moto and BMX I guess and I think this could help push it out into the limelight.
Matt: I just want it to represent big air and good times. Being on the forefront of progression, like jumping into the abyss. 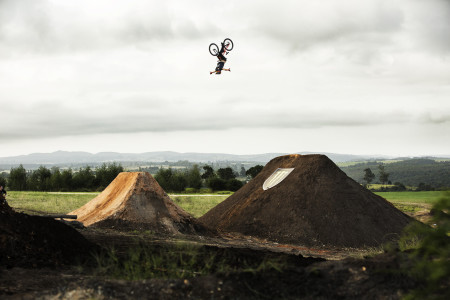 What can fans expect from Pure Darkness 3?
Sam: They can expect everything they enjoyed in Pure Darkness 1 and 2, and way more. We’ve got a lot of dudes in shooting this stuff just so you don’t miss it, so we can translate it into real life.
Matt: Huge, huge crashes.

Give us a rundown of the jumps, the roll-in and anything else that makes up the features?
Matt: We’ve got the 70 foot tall roll-in and we two exits, one from the front and one from the side. The front takes you into the biggest step-up ever seen. The side brings you into the shark-fin, which goes into this massive trick booter and then right into the step-down of doom and then the fourth is just like a rocket ship hip, a huge sender. 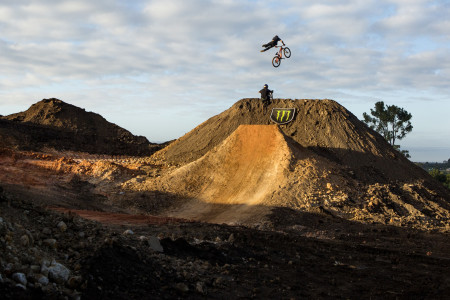 With the raddest jumps ever seen, what tricks are you planning to pull on them or witness being pulled?
Sam: I think this year is, hopefully, more focused on the jumps rather than the tricks and the building and how sick the jumps are, but obviously we’re going to send a few moves.

Explain the feeling rolling into the massive step-up?
Sam: It’s super intense for like 6 seconds and then there is 2 seconds of, ahhh. Then you’re like, fuck this I’m never jumping that again, and then you walk back up to the top.
Matt: [laughs] Am I going fast enough? Oh my God I’m going too fast to oh my God I’m not going fast enough and then boom. In the air it’s silence for like 2 seconds. 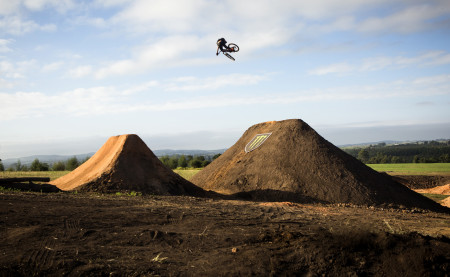 What goes through your mind when you’re running into the jump line for the first time?
Sam: Stuff goes through your mind of what could happen, maybe I’m going to overshoot or maybe I’m going to case.
Matt: The first time I was super nervous. Speed is a huge question, personally when I went down, as soon as I hit the bottom if the roll-in transition I was like, man it’s on, this is awesome.

When can the world expect to see the final Pure Darkness 3 edit?
Sam: Late March hopefully.

Photos by Grant Mclachlan
*Photos remain the property of Monster Energy and LW Mag and are not for distribution in any way without permission.