This Saturday, 4 April, MMA fans will be treated to a top class fight card as EFC returns to Durban’s International Convention Centre for their EFC 38 event. Fight night will feature 12 exciting fight including the Featherweight Title fight between Boyd Allen and Wesley Hawkey.

Meeting for the 2nd time, Wesley Hawkey will be looking for support from his hometown crowd as he steps into the hexagon to face one of his biggest challenges of his career, and will be looking for redemption against the undefeated Boyd Allen.
The penultimate fight on the card sees SA’s Martin van Staden face Irishman Ayo Daly who dropped everything to replace an injured Peter Queally and is looking to go home with the win.

Other fights in the main card feature Saxon Delafield against Igeu Kabesa, Tyson Chelin against Hanru Botha and Kyron Davies against Polish fighter Rafal Haratyk. The card is rounded off with another 7 action packed fights including EFC’s second Women’s bout between SA’s Amanda Lino and Ireland’s Stephanie Quaile. 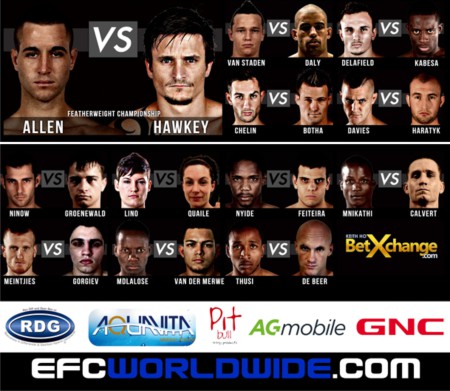