Friday the 1st June saw the much anticipated EFC Africa 14 return to Carnival City, JHB and what a fight night it was; filled with intense and exciting fights, especially the two title fights that had fans glued to the cage to see what the outcome would be!

The night started off with a Middleweight fight between Tshikangu Makuebo and James Le Roux which unfortunately was missed by plenty due to heavy traffic to Carnival City. The fight went to the judges and Makuebo took his first professional win by unanimous decision.

Fight 2 – Lightweight: Wade Groth vs Markus Taljaard
Both fighters came in hard in round 1 exchanging punches and with Taljaardalmost dropping Groth and Groth retaliating by taking the fight to the ground. Round 2 and 3 were very similar starting out with some great stand-up fighting before going to ground. Groth dominated when the fight went to the ground getting himself into full mount and landing some ground and pound. Taljaard had good defence on the ground and in round 3 managed to get Groth into a triangle choke forcing Groth to tap out. 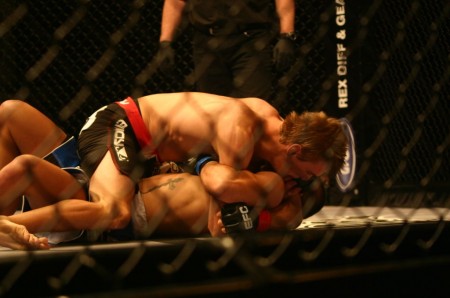 Fight 3 – Featherweight: Koba Iakobidze vs Alain Ilunga
This was a closely matched fight with both fighters exchanging big kicks and hard punches. Iakobidze was definitely looking for a knock out by throwing bombs but Ilunga defended and responded just as hard. When the fight went to ground it was a back and forth battle. In round 3 Iokobibze gave in to Ilunga’s heavy body kicks opting out by verbal submission. Ilunga took the win. 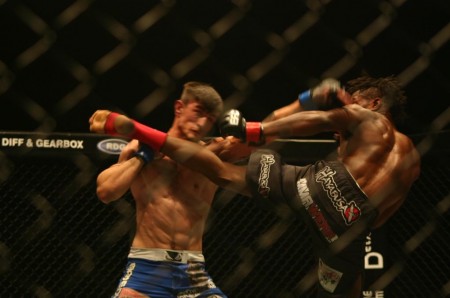 Fight 4 – Welterweight: David Buirski vs Kelvin Mwale
This was an EFC debut fight for both of these fighters and was a fight that wouldn’t go past round 1. Buirski’s tactic of kicks worked, he landed some good kicks but was moving away from an always-approaching Mwale and out of nowhere landed a big kick Mwale’s head, dropping him to the ground. Buirski took advantage and went in with some heavy heavy ground and pound. The ref called the fight and Buirski was overjoyed with his first EFC win by way of TKO. 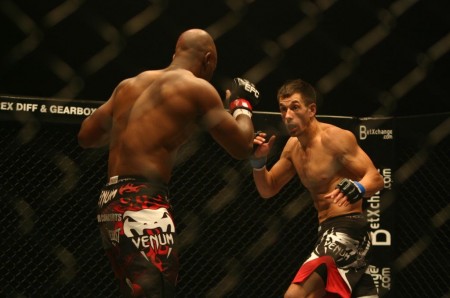 Fight 5 – Lightweight: Alex Cheboub vs Ashley Calvert
Round 1 and Cheboub came out firing, landing 2 hard kicks to Calvert’s body. Cheboubwas precise as always and took Calvert to the ground; the fans were treated to a great display of ground work by both fighters. Calvert was trying for all types of submission with no luck; Cheboub got in some ground and pound. A mistake at the end of the round by Cheboub almost let Calvert lock a rear naked choke in.
Round 2 saw Cheboub try with 2 roundhouse kicks; both unsuccessful and the second caused him to slip to the ground. Calvert took advantage of this before they went back to stand up. Cheboub landed some great punches before taking Calvert to the ground. Calvert tried everything but Cheboub’s ground game was just too good, seeing him lock in a tight key lock and forcing Calvert to tap out. Cheboub definitely deserves his nickname of ‘The Professor’ 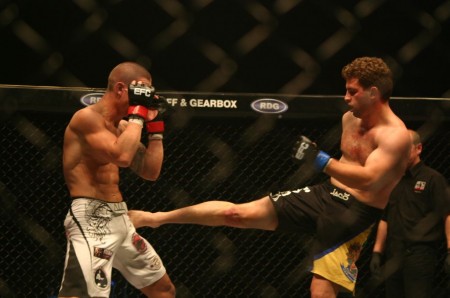 Fight 6 – Middleweight: JP Kruger vs Mawande Vapi
Another quick fight that was over in round 1.Both fighters went in hard and the fight went to the ground quickly. Kruger got Vapi’s back and tried to lock him in a rear naked choke, Vapi defended this for sometime but Kruger locked the submission in properly which saw Vapi tap out at 1 minute 47 seconds into the 1st round. 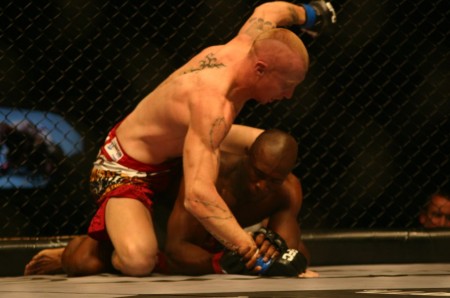 Fight 7 – Featherweight: Terrence Griessel vs Gareth Buirski
Round 1 saw a very scrappy round with Buirski dancing all over the place and coming in with big one twos, one of which caught Griessel, knocking him to the floor. Buirski tried to take advantage of this but Griessel’s ground game is brilliant and he defended himself well.
In round 2 Buirski had the same tactic by dancing around Griessle while Griessel remained calm and composed, almost looking frustrated with Buirski’s tactic. The fight went to the ground but Buirski stood up and let Griessel stand up; he wanted a stand up fight and tried with big knockout punches but with no luck. Nearing the end of the round the fight went to the ground and Buirski tried to lock in a rear naked chock but Griessel made it hard for him and was saved by the bell.
Round 3 started out the same with Buirski throwing combo punches but not landing them. The composed Griessel got Buirski into a guillotine choke, forcing him to tap out. Griessel received the Submission of the Night Award with his impressive guillotine choke. 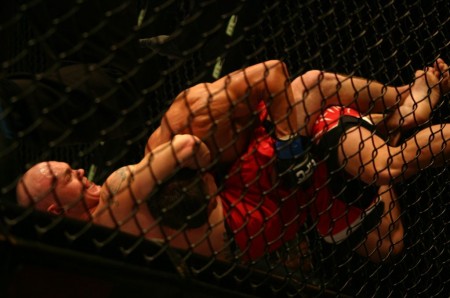 Fight 8 – Welterweight: Francois Kabulu vs Amr Wahman
This fight went to the judges after a 3 round grapple fight with Kabulu in control of most of it and almost ending it in round 2 when he locked in a rear naked choke, but Wahman was saved by the bell. Both fighters were tired in round 3 and exchanged punches; Wahmanwas throwing most of them but it was not enough and the unanimous decision went in favour of Kabulu. 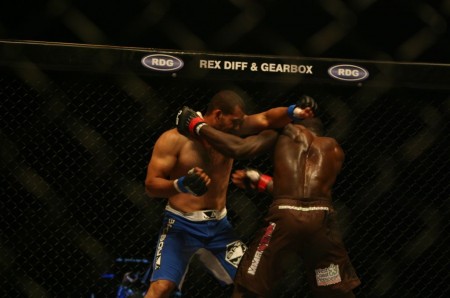 Fight 9 – Featherweight: Wentzel Nel vs Denzil Wait
This was one great fight which saw Wait rock Nel with a big punch at the start of round 1. Nel retaliated by grabbing onto Wait and running him across the cage, taking the fight to the ground. Nel was in position, trying to land some ground and pound and Wait defending whilst trying all types of submissions.
Round 2 saw Nel slam Wait to the ground. The fight went back and forth as both fighters were good on the ground but Nel eventually got into position and rained down on Wait with some big elbows to the face. The ref called the fight and Nel took the win by TKO. 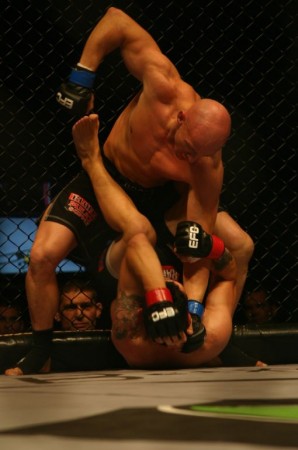 Fight 10 – Middleweight: Garreth Mclellan vs Danie Van Heerden
Definitely a crowd favourite! Mclellan came in with a big kick to Van Heerden’s head but Van Heerden was not shaken and took Mclellan to the ground resulting is some grappling before they stood back up. Van Heerden looked to have a guillotine locked in but Mclellan took the fight to the ground. Mclellan stood above Van Heerden wanting to bang and landed some good ground and pound until the bell went for the end of the round.
Round 2 saw Mclellan yet again land another head kick and Van Heerden responded with a combo of punches. Mclellan took the fight to the ground again and took Van Heerden’s throat with a rear naked choke. Van heerden tried to fight it off for a while but eventually had to tap out. Happy with his win Mclellean called Jeremy Smith out for a rematch.

Fight 11 – Heavyweight: Bernado Mikixi vs Mahmoud Hassan
This was a slug fest between these two monsters but Mikixi landed some heavy blows taking Hassan to the floor. Mikixi then rained down on Hassan with his usual heavy ground and pound. The ref called the fight at 2 minutes 11 seconds with Mikixi taking the fight by TKO. Mikixi’s next fight will most likely be a title fight against Ruan Potts. 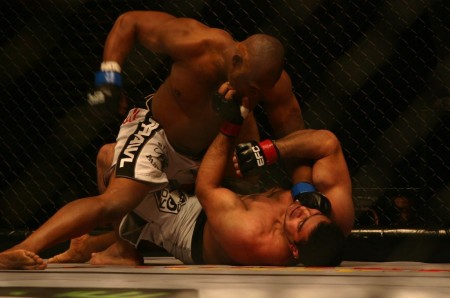 Fight 12 –Featherweight Title Fight: Demarte Pena vs Wesley Hawkey
Round 1 saw the fighters exchange a few punches and kicks before Pena slipped to the floor and Hawkey took advantage as quick as possible. The rest of the round was fought on the floor back and forth. This definitely shaped up to be a greatly matched fight.
In round 2 Pena came out with some leg kicks and timed punches. Hawkey went in for the takedown but Pena tripped him, taking Hawkey to the ground and putting himself into position. Hawkey tried with an armbar but Pena pulled out of it. Hawkey managed to turn it around and landed some elbows to Pena’s face.
Round 3 saw the fighters looking a bit tired and exchanging a few kicks. Hawkey went in landing some punches but Pena reacted by taking Hawkey to the ground in the last minute.
Revived in round 4 both fighters came out swinging, landing some fast combos. Hawkey at this stage was now bleeding from his head and caught Pena with an array of punches but Pena again took Hawkey to the ground. Hawkey tried a whole bunch of manoeuvres but had no luck, when Hawkey tried to turn it and stand up Pena took advantage by taking Hawkey’s back and locking in a rear naked choke. Hawkey tried to hang on until the bell but couldn’t and tapped out. Pena proved why he is the EFC Featherweight Champion and hangs onto his championship belt. 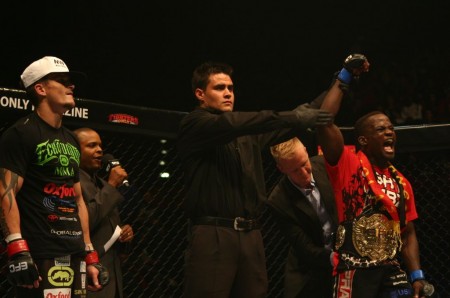 Fight 13 – Lightweight Title Fight: Costa Ioannou vs Adam Speechly
This five-round battle was definitely the fight of the night and lived up to everyone’s expectations.
Round 1 saw Ioannou take the fight to the ground. Both fighters have a very good ground game and manoeuvred around each other. Ioannou managed to get a few elbows and punches in causing a cut on Speechly’s right brow.
Round 2 started out as a stand-up and clinch battle with both fighters trying for the takedown. Ioannou finally got Speechly to the ground and tried to get into full mount which Speechly was making very hard for him to do by trying with submissions. Ioanno then got some ground and pound in but Speechly somehow managed to stand up the fight. They went to the ground again this time with Speechly in position, giving Ioannou some of his own back.
In round 3 both fighters came out swinging and they went to the ground quickly. Ioannou in position then Speechly then Ioannou again and then Speechly again. The fans were going crazy. Both fighters had their chance at landing some ground and pound and both defended very well. Speechly definitely owned this round.
Round 4 saw Speechly with some good stand up before Iaonnou went for the takedown and locked in a rear naked choke but Speechly got out and the fans went off again.It was a back and forth battle on the ground and then they stood back up. The crowds were chanting ‘Costa, Costa, Costa” on one side and “Speechly, Speechly, Speechly” on the other side. Ioannou was now tired and Speechly went in with the punches which looked to be the end of Ioannou’s fight but he retaliated by taking Speechly to the ground.
Speechly again landed the punches in round 5 and again Ioannou took it to the ground getting himself into side control and landing elbows. Carnival City was then treated to some great stand up again after the ref stood the fight back up but Ioannou wanted the fight on the ground and went for a successful takedown again. Speechly rolled out and tried for the armbar but was unsuccessful. With 5 seconds left of the fight they stood up and Speechly went in with the punches with all he had but time ran out.
This was such a closely matched fight and Speechly definitely tested Ioannou but after going to the judges they scored the fight in favour of and still the EFC Lightweight Champion Costa Ioannou. 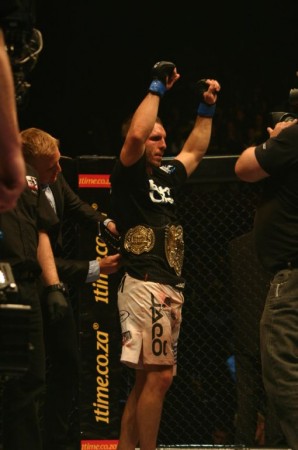 Check out the gallery below for more photos from fight night: